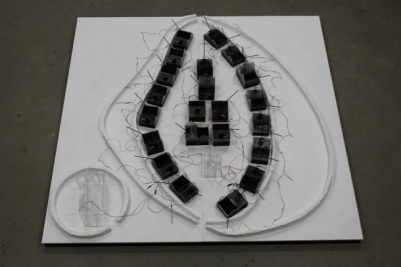 Microbial Schöppingen, a model based on Schöppingen in the year 1600, acts as a parallel town where communities of bacteria, one of the most ancient life-forms on earth, inhabit Plexiglas houses where they work together to create light.

Bacterial communities are diverse, much like human communities, and each type of bacteria can perform a number of different functions within their society. In Microbial Schöppingen, bacteria make an electrical current as they break carbohydrates down into smaller molecules, namely carbon dioxide and hydrogen. These anaerobic bacteria, meaning they live in spaces without oxygen, will gradually build biofilms, thin groupings of bacteria stuck together, on graphite electrodes. Each anaerobic house connects to a neighboring oxygenated house, which contains a salt solution to increase its conductivity. Protons, also known as hydrogen ions, travel through the solution from the anaerobic chamber (negatively charged, called an anode) to the oxygenated chamber (positively charged, called a cathode). The electrons that the bacteria release as they eat collect on the graphite electrodes and push their way through the wire and the resistor toward the cathode. Once these bacteria have developed a strong habit of eating in this way and releasing electrons and protons in the process, they can be harnessed to create small currents of electricity. The technology is known as a Microbial Fuel Cell.

Researchers at the Laboratory of Microbial Ecology and Technology (LabMET) in Ghent helped me make these Microbial Fuel Cells function more efficiently. When we met, they described a variety of applications that Microbial Fuel Cells could have: making bio fuels and plastics, recharging off shore ocean sensors, and cleaning wastewater.

To create the microbial communities for Microbial Schöppingen, I combined local river mud with already “trained” electricity-producing bacteria from LabMET in a large one chamber MFC, which was producing 0.4 Volts with approximately 5 milli-Amperes within a month. I divided the mud and water from this “Mother” Fuel Cell into smaller, two chamber Plexiglas cells, in the shape of paired houses. After another month of experimentation, I connected my best MFCs in series. For four days I continuously monitored and fed them to help them maintain a high enough voltage to power a bright white 3 Volt LED placed in the center of the model Altes Rathaus (Old City Hall). I was even able to illuminate a second small yellow 1.8 Volt LED for two nights in the St. Brictus Church model. The light in the Altes Rathaus created a great shadow on the wall of the Atelier, which I used to performed short wordless shadow-puppet plays about the lives of the bacteria producing the electricity. Public from the Künstlerdorf, from Schöppingen, and from nearby towns came to see the work and speak to me about the convergence of science and art in this sculpture.
This project was created as part of the Kraftwerk Künstlerdorf program at the Stiftung Künstlerdorf Schoppingen, in Germany.
Many thanks to the researchers of LabMET at the University of Ghent, in Belgium, for their guidance.
Thanks to the SGL Group for donating graphite felt samples for MFC experimentation.
Microbial Schöppingen was awarded an honorary mention in the Prix Ars Electronica 2013, in the category of Hybrid Arts http://www.aec.at/prix/en/gewinner/
Copyright 2013 Mick Lorusso. All rights reserved.